UPM Popular Marian University - Who we are to contribute to the fulfilment of Jesus’ testament “that all may be one” (Jn 17:21), bearing in mind universal fraternity.

The Popular Marian University (UPM) was founded and inaugurated by Chiara Lubich on October 15th 1980 in Rocca di Papa (Rome-Italy) and was placed under the special protection of St. Teresa of Avila.
In order to understand the intent that this University pursues, it is necessary to start again from an experience made by Chiara Lubich while still young:

“Desirous as I was for the truth, I had understood how absurd it would be to seek it in the study of philosophy when I could find it in Jesus, the Incarnate Truth. So I gave up studying in order to follow Jesus. The Lord didn’t have me stop studying in order to have only supernatural understandings, for example, but in order to possess the fullness of life in following Christ. I would find a new light in this life, because the Gospel says that God will manifest himself to those who love him. That episode was a prelude to what would come about, in time, within the [Focolare] Movement itself. The light we found, however, was to become the soul of a way of life. … We called this light “wisdom,” and I think that, through the grace of God, this has been Christian wisdom, because it gave order to a Work of God which is recognized as such by the Church. And we understood that wisdom was to be the essence of our new studies, the studies for all the members of the Work of Mary. [15th October 1980]“ 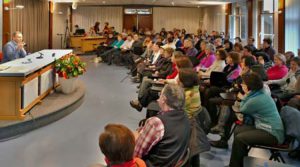 The aim of the UPM is to teach Christian wisdom. It is “the knowledge that God has of Himself and, in Himself, of all things: a very pleasing knowledge – that is why it is called wisdom – because in God it is always knowledge in love, in the Holy Spirit [1]”. This is why the Popular Marian University aspires to have no other professor than Jesus, at whose school all the professors put themselves and for whom they want to leave all the space in them, among them and in their relationship with the students.

Wisdom is a gift that comes from on High. Wisdom must be asked of the Father with confidence; it can be obtained by loving one’s neighbour, embracing Jesus crucified and forsaken and keeping the presence of the Risen One among those who gather in His name. It must be accompanied by everything that is ordinarily called “study”, that is, by all those notions that are the fruit of human ingenuity. In fact, faith is rational and reason serves faith.

UPM is divided into multi-year courses entrusted to different teams of professors. Because of the popular character of this University, the texts of the lessons are as simple, universal and accessible to all as possible. The lessons recorded at Rocca di Papa (Rome – Italy) serve as a basis for the courses held in different countries, where local professors review them and adapt them to the local situation.

Each year of study ends with final talks experienced as moments of communion in line with the spirituality of unity. In fact, even in teaching and learning, everyone tries to keep the presence of Jesus alive among them (cf. Mt 18:20), so that it is He who informs everyone’s thoughts with His wisdom.

The general statutes of the Work of Mary – Focolare Movement state that its members “must have a basic catechetical formation [and that] they must also possess a cultural, theological and professional formation, continually updated and improved, appropriate to their state of life and vocation” (art. 65). It is also in response to this precise request that the Popular Marian University was founded. In 2007 it was followed by the Sophia University Institute, which is based in Loppiano (Incisa in Val d’Arno – Florence) and offers, among other things, master degree courses in Economics and Management, Political Science, Trinitarian Ontology and the Culture of Unity.

The UPM, which began in the academic year 1981-1982 with a six-year course in Theology, then held a course in Sacred Scripture and from 1991 to 1994 courses of a theological-spiritual nature elaborating the reality of God Love, found in Chiara Lubich’s experience and thought, in Christian tradition and in contemporary culture.

In the following years a course on the Catechism of the Catholic Church was held, divided into 53 lessons.

It was followed by a five-year course in Church History and, following the publication of the Compendium of the Catechism of the Catholic Church, in 2005-2006 a further study was made of it.

From 2009 to 2020, annual courses on the 12 points of the spirituality of unity were held, entrusted to specialist professors to elaborate the contents from a theological point of view.

On the occasion of the fortieth anniversary of its foundation, the UPM renewed its graphic layout and its method as well, using the Moodle platform and offering its students a training course on the essentials of the faith and Christian life in four small e-learning courses held by 18 professors from the five continents.

The UPM, which has its Central Secretariat in Rocca di Papa (Rome), makes use of regional secretariats in the various countries of the five continents. More than 45,000 people have registered since its foundation in 1980, and it offers them the same training programmes in different languages. In addition, each local secretariat, with professors from their region and culture, offer content that meets local needs.